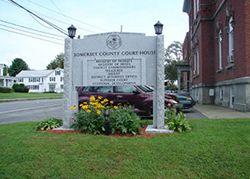 Somerset county was incorporated in 1809, while still a part of the Commonwealth of Massachusetts. It is the 3rd largest county in the State of Maine in geographic land area and contains the 9th largest in population. Its boundaries stretch 154 miles from Fairfield to Aroostook County, averaging 50 miles in width with Piscataquis County on the East and Franklin County and the Providence of Quebec, Canada on the west. The county encompasses 3,984 square miles of which 96% is covered by forest.

Population & County
The county's population is 50,888 and has a strong ethnic background in French Canadian, Irish and English. There are 33 Townships in Somerset county and 83 Unorganized Townships. There are no cities.

River
The Kennebec River, one of the largest Maine river tributaries flows from north to south through the county and is used for commercial as well as recreational purposes. Somerset county also contains major ground transportation routes that support heavy commercial, tourist, and residential use.

Maine Route 201 is a route of vehicle and commercial transportation that stretches from the United States and Canadian border crossing site near Jackman on Route 201 to the I-95 Connector in Fairfield, the most southern community. This route carries heavy tourist traffic from the Quebec Province in Canada as well as heavy commercial transportation of manufactured products to New England and Southern States.

U.S. Route 2 traverses Somerset county, which serves as the major east-west Connector Route from the I-95 Connector in Newport / Palmyra through to the White Mountains in New Hampshire and points beyond to Vermont, up-state New York, and the Province of Ontario, Canada. Commercial, tourist, residential and much Canadian traffic also travels this route from New Brunswick, Canada to Western Canadian Provinces.